When Dwayne’s grandfather Ken Affleck passed away at age 95 in 2014 he also left behind his pride and joy – an extremely rare BMW R5. Just 2,632 were built between 1936 and 1937 and only a handful remain. Dwayne now has the honour of restoring his Papa’s legacy.

Dwayne, you’re an avid motorcyclist. Is a love of riding in the genes?

I would say, “yes” but not just a love of riding – it’s a love of all things automotive, mechanical and engineering. My grandfather and my great grandfather even built their own plane, back in the day. Papa later worked for ESSO as the Head of Oil and Fuel Engineering which lead to him being involved with F1 drivers like Jim Clark and Jack Brabham. My father Rod is a retired mechanic and I’m an auto electrician. We’ve all had (or still have) involvement in two and four-wheeled motorsports. I have definitely discovered motorcycling more in the last five years which has taken me all over Australia and to the other side of the world by competing in and finishing Red Bull Romaniacs in 2019.

Your grandfather Ken has left you with a very special motorbike. What does his rare 1936 BMW R5 mean to you?

It means everything! It’s been so cared for and loved; in fact, it’s pretty much as it came off the floor with the exception of some minor marks and aging paint as it was used as a bike should be ridden and enjoyed. Being so entrenched in the family, it’s also significant that I’m working on it alongside my dad and my twelve-year-old son, Harry. It is very much a family affair.

Do you know of any other R5’s in Australia?

Currently we’ve been unable to track down any other complete R5s in Australia, apart from one in pieces awaiting restoration. Shannons and Lloyds couldn’t either when approached for an evaluation of my grandfather’s bike. We know some R5s have been here in the past, but have then been sold to overseas buyers. There are those that haven’t seen the light of day so they have lost track of them and don’t know if they still exist as a whole bike. To my knowledge there seems to be only a few known of world-wide, one of which is owned by Lord March – Founder of the GoodwoodFestival of Speed. I believe BMW themselves have three in different states of condition (one restored, one in their bunker and one unrestored). There are a few in the US and a handful throughout Europe, but being a pre-World War 2 and only 2500-odd made, a lot would have been scrapped for materials during the War or lost to the fighting.

Ken was a new father when he purchased the R5. Was it his first motorcycle?

His first bike was second-hand 1925 BSA 250 round tank 2-speed which he later sold. He then got a DKW motorcycle. In 1948 he purchased the BMW R5 Sydney dealer called Arncliffe & Homebush Motorcycles. My grandfather knew the owners and learned the R5 was for sale there on behalf of an Air Force personnel. Then in the early 2000’s he bought an R27 BMW 250 single cylinder. This was because he wanted to attend the early VMCC Easter Bike Rally at Bathurst and couldn’t get some parts in time for the R5.

Given its age, this R5 is in remarkable condition. Is it true that when Ken married your grandmother he wasn’t allowed to ride it?

Mama definitely wasn’t fond of the bikes, but when the kids came along and were growing up Papa decided to give up bike racing and general riding. He stored the R5 until her passing in the mid-1990s, then dusted the bike back off. He pieced a few bits back together and started riding again in his mid-70s all the way up until he was 93 years old. Papa was a very active member of the Vintage Motorcycle Club NSW during his later years.

Back in the day, why do you think the R5 was such a gamechanger for BMW?

After riding it around the streets when we first picked it up I would have to say it’s an amazingly balanced bike with a great riding position. I’ve ridden a few other newer bikes (1960s models ha ha ha) and they ride nowhere near as well as the R5 does. The, design and engineering in the bike is astounding in my eyes for its era, too plus in its day it rivaled cars for top speed performance.

What type of work is involved to get your R5 project on the road?

Surprisingly not much has been needed. We aren’t there one-hundred percent just yet, but it’s just some perishables like fuel hoses, some carburettor gaskets and oil seals as we did have it running when we picked up the bike. We’ve kept it in storage for four years until we were in a position to give it proper attention it deserves. With the recent world situation and travel restrictions there’s been delays unfortunately. We expect it to be finished towards the end of May or early June.

Many aspects of BMW’s new R18 have been based on the R5. What are your thoughts?

Personally, I absolutely love the new R18; the efforts that they’ve gone to, to give it the old-school character while working with modern regulations for emission, etcetera are huge. I can only imagine how hard it is to make a bike stand out today, especially in the cruiser market they (BMW Motorrad) are targeting. It’s a tough task with very well established competitors .

Tell us about Ken’s scrambling days:

Papa was involved with the Dulwich Hill Motorcycle Club as they had a track situated on his large Kellyville property. He was a multiple trophy holder with the Two-Stroke Club of NSW in 1939. He and was involved with a trials club who held events at Castlereagh on the rocks and banks of the Nepean river; the idea was having to ride over the boulders without putting feet down to not lose points.

Later in life Papa loved to run with the VMCC who used to hold average speed rallies and navigational events; this included him having a minor off while riding down a dirt road and he couldn’t slow the bike quickly enough and ended up having a soft lay down of the bike in the grass just off the road. He was so mad because he finally got to pass this “young, slow annoying rider ” who was holding him up.  We found out this “young” rider was in their late 70s and my grandfather was in his early 90s at this stage (ha ha ha!) Another time he was enjoying his riding a little much and ran wide going under a viaduct out at his favourite event near Bathurst, scrapping the side of himself down the guard rail just enough to leave some bruisers – but not enough to knock him off the bike or even leave a mark on it. 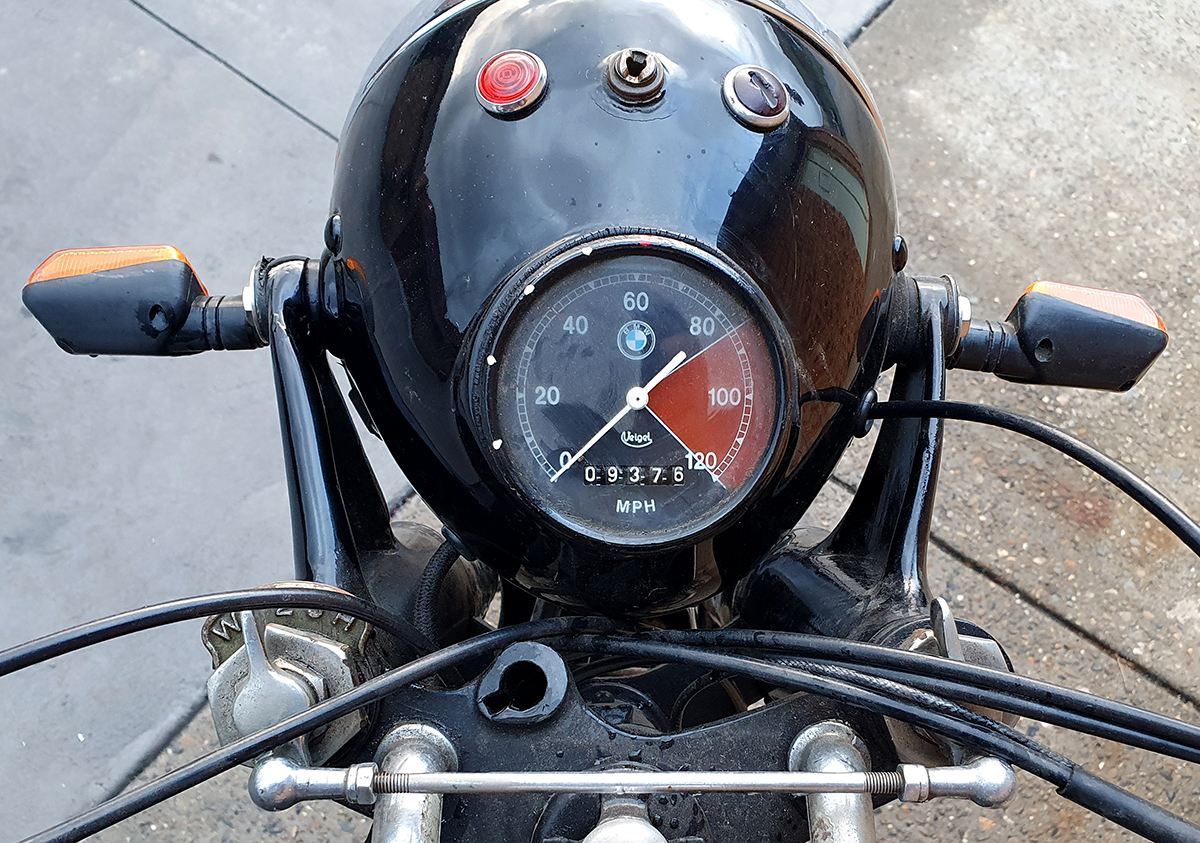 Do you have any future plans for the R5 or R27?

The R5 will be kept in the family forever. It’s one of those special bikes that we’re the only custodian of as my grandfather will always be the owner of the bike. The R27 just needs a blinker/horn combination for registration and my parents will be looking to sell it soon after. It never had any real significance to my grandfather who only kept it as a backup for his beloved R5.

Special thanks to Dwayne and family
for sharing Ken Affleck’s R5 legacy.

Discover how the R5 was the inspiration for BMW’s new R18 cruiser in A Bavarian Soulstory – Episode 1.